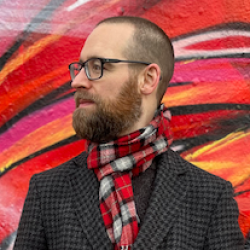 Dan Simpson was Canterbury Laureate 2013-14, and is currently Poet in Residence at Canterbury’s Roman Museum and Knole House, Sevenoaks. He was Poet in Residence at Waterloo Station for Transport for London and Bexley’s poet for Southbank Centre’s London Lines project. Dan has performed at major festivals, events, and venues around the UK, including: Glastonbury, The National Theatre, and the BBC Edinburgh Slam. His first collection of poetry is Applied Mathematics, published by Burning Eye Books, and his poems have featured on the BBC and London Underground. Dan creates pioneering work using crowdsourced and outdoor poetry for organisations such at the Royal Academy of Arts, National Museum of Scotland and the European Commission.